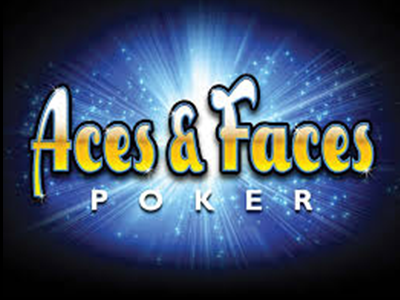 The Aces and Faces slot machine by Amaya Gaming is not a traditional slot, it takes the guise of a video poker slot machine. The game is not played with traditional symbols instead it adopts the 52 cards from a traditional pack of cards. There are no wild cards or jokers used in this game, just the main picture and face-value cards.

When each game is initiated players are betting on a 100-hand basis, once the player clicks deal they are shown their cards at random, a player then has the option of holding any cards of value and continue to play. 5 cards will appear and this is the hand awarded to the player, for new players who are not sure how to proceed there is an automated hold function which can make playing that much easier. For the more experienced players there is the ability to switch to manual play and you will have full control over your strategy.

When the player has finished planning their next move the game will then deal one hundred hands with the shown cards held will remain in position. An example of this in action is if you had a pair of eight’s held, these would remain and the other cards would be dropped. Once the computer has issued new cards it will differentiate between winning and non-winning hands, players will then be awarded credit accordingly.

How to win at Aces and Faces

The overall aim of the game is to have the strongest hand as possible, this can either be achieved by manually holding cards or allowing the computer to play your strategy for you – the computerised version is mathematically sound and will often give players the best chance of winning however there is also the third option of risking it.

Amaya has certainly breached new waters with this game, certainly a distance away from their usual slot titles. We have a vast amount of fun playing this game and would certainly have quick games during downtime. The software is sound and there is no sign of lag or any technical difficulties, we played this on a Windows OS machine but the game is so compatible with other mediums that the experience changes very little.

The payouts are a fair representation of wagered amount, this can be increased or decreased depending on the playing levels of the punter. The game is relatively easy to understand but we do appreciate Amaya adding the auto play function which will aid new players in either learning the game or enjoying it on auto pilot.

A good understanding of solid poker hands will be a large advantage to players, although as we did say its automated it can be good to increase the excitement if you know what hands will bring the best pay outs. Overall our review of this game is decent, we enjoyed playing and we are sure this title has appeal to both poker players and new players. There aren’t many online casinos which offer this game however we do try and keep on top of providers who currently host it.