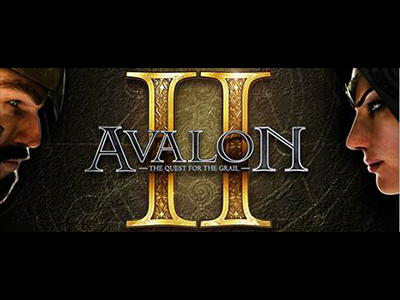 Avalon II The Quest For The Grail comes to us from Microgaming and this game is an extension of the very enjoyable original Avalon slot game.

But with this version Microgaming has turned it into something you could only call a blockbuster in its own right. It comes in 3D animation and offers truly fantastic bonus features.

There are 2 features in the main game plus 8 Bonuses in the Grail Bonus feature. Among them are 3 free spins, trailing wilds, and rolling reels.

This is an amazing slot game in every sense of the word!

Avalon II is a 5-reel, 243-ways to win is the sequel to the Avalon slot game but brought to an entirely new level in every aspect. To a certain extent the medieval theme of this game feels somewhat like Lord of the Rings, pitting good against evil. Players strive to help Arthur in his quest to retrieve the Grain to return it to Avalon. Players can play for just 30p or go as high as £7.50 per spin.

Avalon II will probably attain instant classic status with all the bonus features it offers. In the main game there are 2 features that are triggered randomly. The Merlin feature has its character popping up on a random basis, with winnings being a cash prize or a multiplier. For a non-winning spin, Merlin’s award can range from 4X up to 20X your entire stake. For a winning spin, Merlin’s award can range from 2X to 4X your win. There is also an Expanding Wild feature that pops up on the centre reel.

The first one is the Lake of Legend Bonus, which uses rolling dice. Excalibur has to be finished by forging fragments of the sword together. A roll of the dice reveals the number linked to the number on the sword fragment. When you get matching numbers between the fragment and the dice you move into a reforge display. Whatever number comes up is the same as the multiplier that gets paid out, for instance, if a 6 comes up you get 6X your stake. You get 10 rolls of the dice in total and if you are able to reforge Excalibur, you win 15X your stake over your prior wins.

The next feature is the Misty Value Bonus, which lets you select your wild. You make a selection among the high-end symbols and this will act as an additional wild while the feature plays out. This additional wild has a 2X multiplier. When you have finished playing the initial 2 features, you get to select between the 3rd and the 4th bonuses as described next.

The 3rd one is the Whispering Woods Bonus, which allows you 1 pick among 5 different options. You pick 1 shield hoping to win the highest possible multiplier. The available multipliers start at 10X your stake and continue on up to as much as 160X your stake, but only if you’re really lucky.

The 4th one is the Forest Falls Bonus, in which you get 20 free spins and they come with a 1X multiplier. Watch for the Avalon II wild since this acts as a Trailing Wild. If one of them pops up on row 1 or row 2 on any reel, it will remain there, expanding downwards and then hold there for 1 spin.

The 5th one is the Dusky Moors Bonus, in which you view 12 different items on your screen. Your task is to get 2 matching helms and you must keep on picking until you do. Every helm comes with a multiplier that ranges from 6X up to 20X. With each pick that doesn’t match your multiplier is increased from 2X up to 8X.

The 6th one is the Morgan’s Keep Bonus that awards you 20 free spins that come with a 2X multiplier. Here the Rolling Reels are applied so with every win in a row your multiplier increases from 2X up to 3X, then 4X to 5X and up to 6X. So basically you can win a 6X multiplier on every free spin, but only if you get really lucky.

The 7th one is the Hall of Shadows Bonus, in which every move you make awards you a cash prize. If you are successful in blocking or attacking, amount of your cash prize changes. It’s up to you to decide the best way to block or to attack the Black Knight so you can get the Grail back.

And the last one is the Isle of Avalon Bonus where it’s up to you to spin to try and win the highest possible bonus multiplier. There are 4 wheels but you are able to unlock the 4th wheel only by getting a 0 to pop up on the 3rd wheel. Whatever number pops up on each wheel is the amount of the multiplier you win.

Our review of the Avalon II slot machine

Avalon II might seem a bit overwhelming at first but once you get started you will find this really is an easy game. The saga of Avalon II causes players to almost become emotionally involved and the intrigue in the game is reminiscent of when I played Immortal Romance. In my opinion this is a medium to high variance slot game with the biggest wins happening during the Free Spins feature.

If you play at £7.50 per spin you have a chance to win as much as £121,500, which is HUGE. This means the most you can win per spin is 16,200X your stake. Regarding the bonus features, my favourite is the Forest Falls Bonus since the Trailing Wilds offer very generous wins, but only if you get lucky and win some free spins.

I predict that Avalon II will become a blockbuster slot game for players and for now, I just can’t seem to stop playing it. I give it my highest recommendation!