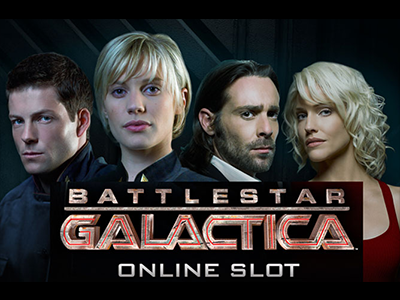 Battlestar Galactica is a 5-reel, 243-ways to win video slot game that comes to us from Microgaming and takes after the science fiction TV drama of the same name produced by NBC Universal. You can play the main game in 3 different modes of Normal, Run and Fight, each one triggering a variety of features.

Just as in the long running TV series, the game is about the last remnants of humanity and their efforts to find a new place to call home. Players can bet with as little as 30p or up to £15 per spin to play the game. Battlestar Galactica offers 3 modes to play in plus 2 features for free spins.

In the main game you have stacked wilds on reel 1 and also during the Free Spins. In the Ion Storm feature as many as 5 reels can turn totally wild and this feature is randomly triggered. While playing in the Normal mode if you have 3 or more scatters of the Battlestar Galactica symbols pop up the free spins feature will be triggered and you will win 15 free spins that come with a 3X multiplier.

While playing in the Run mode, winnings are paid from left to right and also right to left. When the FTL symbol pops up on the centre reel all the Royal symbols turn into mysterious symbols, which award you with additional wins. This mode is triggered randomly.

In the Fight mode random symbols transform into wilds and this can happen at any time. The Cylons will be battling with the Colonials on your reels. Wilds can split into double wilds, which creates even more chances of winning. Watch for the scatter of the Battlestar Galactica because if 3 or more pop up you will win 5 free spins. Additional free spins can be won during this feature as well.

There is a Ranking Achievements feature in this game, which means the more you play it; the higher your rank goes. You start as a Civilian and strive to reach Admiral. With every rank that you achieve, you will win more video content for the game, which makes Battlestar Galactica all the more exciting.

Final thoughts on this Microgaming slot

Although I was never a fan of the TV series I really enjoyed playing Battlestar Galactica. I certainly have an appreciation for the Ion Storm feature since I’ve twice had 4 wild reels! The free spins that are triggered in the Normal mode have also been quite generous in their winnings.

The game is considered of medium variance, which means that you can win big and these wins come along on a consistent basis. This is why I like this game, as I really don’t have the patience to wait long periods of times for a win. I also liked the animations, graphics and the sounds, which are all really superb. I will continue to come back to this game and I certainly can recommend it to others as it provides really good fun.