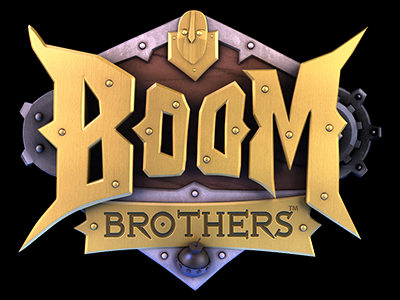 Boom Brothers is a 5-reel, 20 payline video slot that comes to us from Net Entertainment. The game takes place in a mine and involves 3 hard working brothers (the Boom Brothers) who happen to be dwarves. They 3 take explosive devices into the mine determined to blast their way to riches.

This is the second platinum video slot for Net Entertainment, after Gonzo’s Quest, and comes with an entire range of special effects, animations and fun bonus games.

The game has wide appeal since you can play for as little as 20p all the way up to £50 per spin. Boom Brothers was one of the most popular Netent slots for a long time but has now been overtaken by a some of the newer slots in the past years. That does not mean however that Boom Brothers is not worth checking out. It is a great little medium variance slot game that is filled with bonuses and little surprises. The return to player of Boom Brothers is 94.5%, which is a bit on the lower side of the payout spectrum compared to other higher paying slots. 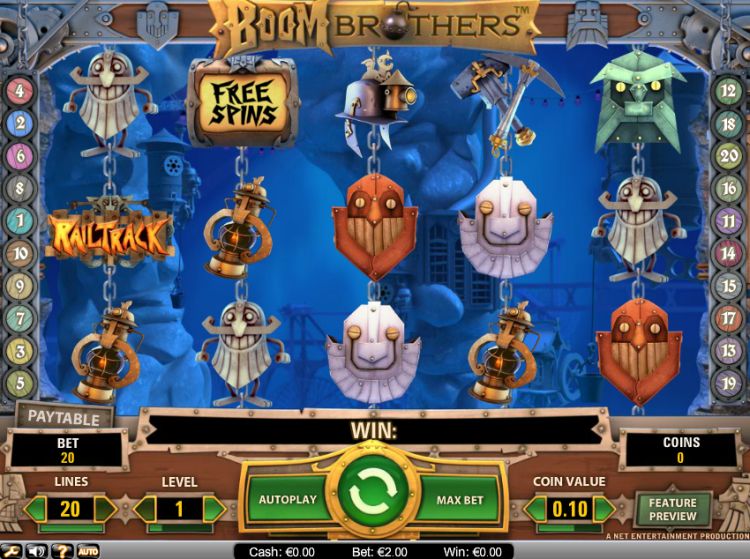 The game has a Free Spins Bonus, offering the potential of winning as many as 20 fee spins that come with a 3X multiplier. There is a Railtrack Bonus as well in which you can get as much as 1,900X your stake, which make this a very exciting game. The symbols in the game come hanging from chains. They look different, but work just like reels. Watch for the Bomb, which acts as a wild. If you have 5 Bombs popping up, you will win a generous jackpot worth 7,500 coins.

The Free Spins Bonus is a main feature of Boom Brothers and is triggered when you get 3 or more of these symbols popping up. Each of these symbols discloses a random number and all get added up to give you from 8 to 50 free spins, which come with a 3X multiplier as well. Every time the Free Spins symbol pops up, you win 1 more free spin.

After that you will be led to another screen showing each Boom Brother on his own Railtrack. You will be asked to pick a card to uncover either a diamond, ruby or gold. If you get a diamond, then that particular Boom Brother will travel on the track to pick up the diamond. Whatever Railtrack you cross over 1st, taking five steps, will award you with that particular prize and you are guaranteed to win a cash prize. The ideal prize is the diamond since it gives you the most valuable prize, which is no less than 1,900X your stake!

Another feature is a Second Chance in which a no-win spin appears randomly and triggers 1 of 4 Second Chance features. Here’s what happens; one of the brothers pops up to switch some of your symbols to give you a chance to get a winning combo.

Boom Brothers is a fun slot game with some really exciting thrills. I would categorize this as a medium variance game because it does pay out on a semi-regular basis and you do win decent amounts. It was first launched in December 2010 and since then it has proven itself to be a definite favourite. The potential is there to win as much as 112,500 coins so you have to admit that this game is certainly worthwhile.