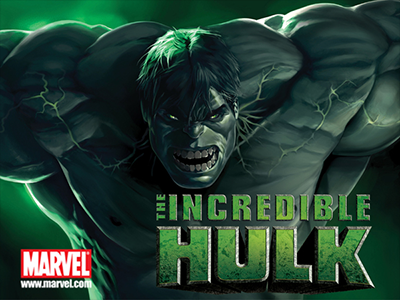 The Incredible Hulk is a superb Marvel slot game with a Expanding Hulk feature where he can expand 3 reels. There’s also a Smash Bonus feature where he smashes police cars and helicopters to get cash prizes with a multiplier. Finally there’s a Free Spins Bonus feature with all wins trebled and 4 progressive jackpots on offer – a top slot game!

The Incredible Hulk is a Playtech-powered Marvel slot game with 5 reels and 50 paylines (like Iron Man 2, it’s been enhanced from the 25 payline version). Like all other Marvel slots, it’s based on the comic book hero and encapsulates The Incredible Hulk blockbuster films with star Liv Tyler and Edward Norton. You can play from as little as 50p a spin to as much as £250 a spin.

I quite like the Smash Bonus feature which is triggered by getting the Smash Bonus symbol on reels 1 and 5. You then see 7 police cars – you can guess what happens next though as you have to ‘smash’ 3 police cars for guaranteed prizes. There are also 3 helicopters of which The Hulk smashes 1 (your choice which one). This reveals your multiplier which can be up to 5x. If you’re lucky, you will trigger the Hulk Rage feature where all 7 police cars are smashed – this will seriously increasing your winning total.

The Incredible Hulk logo is also important and 3 anywhere on the reels will initiate the Free Games feature – you will begin with 10 free spins with a 3x multiplier meaning all wins are trebled. The Expanding Hulk feature which is described below can also be triggered in this feature to further boost your winnings. Finally, you can get more free spins with up to 20 on offer.

The Hulk wild symbol on the middle of the 3rd reel (the middle one) is what you really want to get as this will trigger the Expanding Hulk feature – this can occur in the base game and Free Games feature. The Hulk then takes over the entire reel with 2 re-spins being awarded – the middle reel is an expanding wild reel by the way. If you get The Hulk on the 3 middle reels simultaneously (2, 3 and 4), they will expand to fill all reels with 1 respin. If you get the same symbol on both reels 1 and 5, prepare yourself for a huge win!