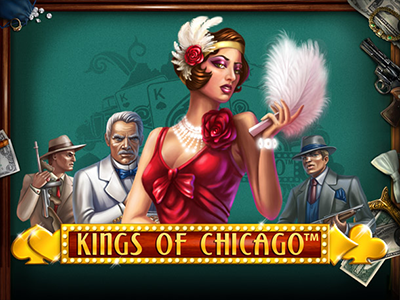 Kings of Chicago is a fantastic one-of-a-kind video slot game coming to us from Net Entertainment.

It’s the very first to put classic slot play together with classic video poker in one video slot. The game takes place in the Chicago of a bygone era when thugs and gangsters were running the streets.

There are 5 betlines in this game, placed on a 3 by 5 interface that has 15 cards being dealt every time you play the slot. Once your cards get dealt, a typical poker hand consisting of 3 of a kind or more pays.

You better have a look around your closet because as you get into the game, you might feel like wearing a zoot suit with a Dick Tracy hat on your head to impress the flashy flapper girls by imitating a crime boss. There are some various gangsters on your face cards plus a wild joker and scatters, which trigger Free Deals (Spins). You will see jewels, money, guns, poker chips as well as other items lying around on the poker table where they are dealing the cards.

Kings of Chicago has a very high theoretical return to player of 97.8% which is impressive even for a Netent slot. That high RTP ensures a firm spot for Kings of Chicago in our top 15 list of best paying online slots. 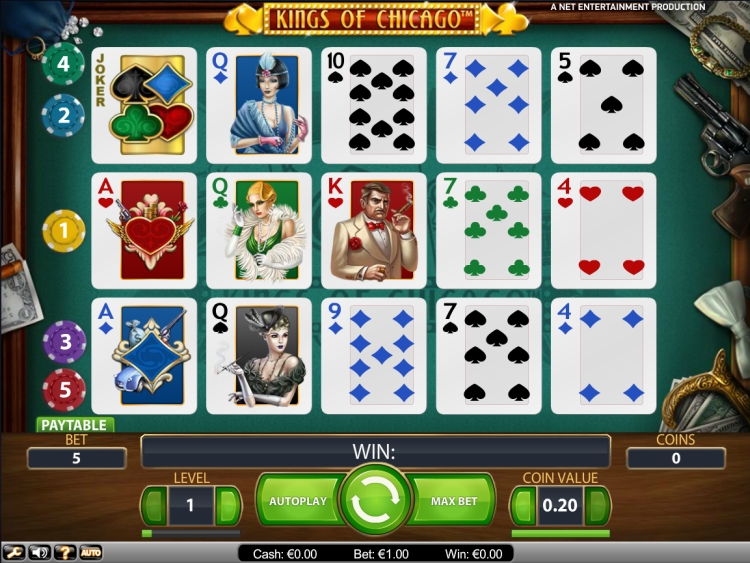 As expected, a deck of poker cards is on the reels, instead of symbols, including a Joker. When the Joker pops up on the reels, you have a 2X multiplier. In the background, you will hear voices chit chattering, the same as you would in an old-style poker parlour. But the voices aren’t overly loud.

As mentioned above, the Joker is Wild, and he can substitute for all the other cards for a winning hand. To improve your winnings, even more, all winnings due to the Joker come with a 2X multiplier, so would be doubled.

The scatter is another interesting aspect of King of Chicago. In this game, any card can act as a scatter. It just randomly pops up after any card is dealt. When 3 or more pop up, the game’s Free Deals feature gets triggered. Free Deals continue with the very same bet you made on the deal that started this. A win with Free Deals on an active bet line pays double.

Kings of Chicago is so much fun for people who play poker, including those who play video poker, due to the generous payouts. Wins are from poker hands, which people are already familiar with, so when you get to see these types of combos on the game’s interface allows you a much clearer picture of your wins, as opposed to the payouts on other video slots.

Kings of Chicago has a straightforward layout with clear and easy to understand payouts clear, but even better is the fact that they come so frequently and tend to be very generous. These are the payout combos for this game: