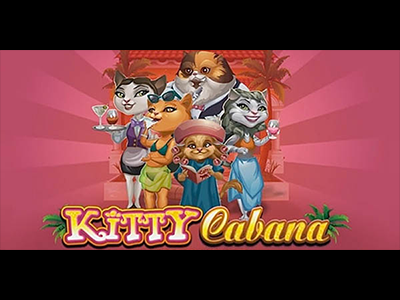 Kitty Cabana is a video slot that comes to us from Microgaming and is a 5-reel, 25-payline game. You can spin for as little as 25p and play this kitty-themed game that offers a broad range of bonuses and other fun features. The Dashing Wild is triggered randomly whereby you see wilds “dashing” across your reels. The Kitty Cabana Bonus feature is this game’s main attraction because it enables you to access 5 Wild spins for free and among them are the expanding wilds, wild stacks, split wilds, wild reels and frozen wilds.

Microgaming provides the power behind Kitty Cabana, which you can play for a tiny bet of 25p per spin or wager up to £37.50 per spin. Based on the name of the game, the theme is felines and has some very cute animated kitties as characters. The setting for the game is inside a luxurious cat hotel and spa for pampering the kitties. Each cat character has a unique personality, which is apparent on the reels. The game’s soundtrack is fun and upbeat music that sounds like woodwind instruments with drum brushes, which actually sounds like a luxury hotel would.

For bonus features, the Dashing Wild is randomly triggered in the main game if and when a non-winning spin occurs. The Dashing Wild is an extra feature whereby dashing wilds move along the centre of the reels and randomly land in various positions. You will hear a regal sounding upbeat swing tune in the background, which adds some excitement.

The Kitty Cabana Bonus awards you some free spins and is set off when you have 3 or more scatter symbols pop up on the reels. You get to play 1 out of 5 wild free spins after you select 3 doors. The door on floor #1 will let you know what your special wild feature is, the door on floor#2 reveals your multiplier, and the door on floor #3 gives you your free spins. You can win as many as 24 fee spins plus a 6X multiplier with this bonus feature.

Another feature is the Super Stacked Wilds where the wild symbols get stacked up to 20 high on reel 2 and reel 4. The Expanding Wilds lets you have wilds that can expand to overtake the relevant reel. The Split Wilds features has wilds splitting into 2 wilds allowing you to make more winning combos, with 6-of-a-kind winds paying twice what 5-of-a-kind wins pay!

The Wild Reels feature allows reel 1 and reel 5 to be totally wild. The Frozen Wilds feature has wilds becoming frozen where they are and remaining there for 3 more spins before they melt away. What’s more, any of the frozen wilds that create a full reel stack will make that reel turn into a wild one for the rest of the free spins.

Kitty Cabana would be considered a medium variance slot game so you have plenty to get you into a furry frenzy. The most you clan win during the Dashing Wild and main game is just 480X your stake. If you were playing at the maximum stake it would come to £110,000!

Theoretically the Splits Wilds should provide the largest wins but I prefer the Frozen Wilds because on a couple of occasions I’ve had frozen wild reels win me 610X my stake.

Microgaming has also come up with a game called Hound Hotel, which is basically the same as Kitty Cabana, only for dogs. If you love cats then you will certainly enjoy Cats or Kitty Glitter from IGT, which are land-based games and favourites for many cat lovers.