Piggies and the Wolf Slot Review 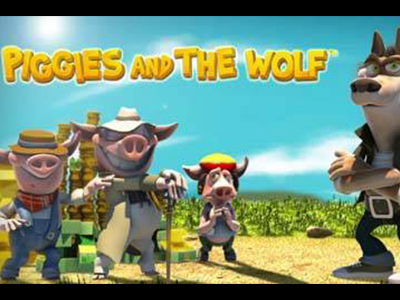 Piggies and the Wolf is a 5-reel, 4-row, 50-payline slot game based on the beloved childhood fairy tale that we’re all familiar with, “The Three Little Pigs.” It’s a lovely game with a very enjoyable soundtrack. It’s a nice break from all the Playtech games based on Marvel comics. In this game the colours seem to emerge from the screen, with very cleverly done animated characters.

While playing you will enter a parallel universe populated by the three little pigs that are somehow characterized as a wealthy man, a guitar player and a stone head. The hero of the game is the wolf of all things! The graphics move smoothly along in this game and that’s how the plot unfolds. You can play the game in instant flash mode or with a version that you can download, either with real money or for free.

Play Piggies and the Wolf Slots

Piggies and the Wolf Features

The symbols in the game are the higher-valued playing cards of the 10, Jack, Queen, King and Ace as well as the Three Pigs, Three Houses, and The Wolf. The logo for the Piggies and Wolf logo as well as a Bonus icon make up the rest of the symbols. The characters are all really well depicted using amazing animation. Each one has very detailed characteristics, giving them all such personality. You can bet for as little as 0.01 up to 50.00. There is no progressive jackpot in this game as there re with the Marvel games, but it’s still a lot of fun.

The Wolf acts as the wild, the game’s Logo is the scatter and the Bonus icon acts as the bonus. Each one of these three symbols triggers a different type of bonus feature and every single one is fun and very engaging. This game can truly hook you for hours at a time.

If you have the Wolf popping up on the 5th reel, this will set off the “Huff n Puff” feature, which has the wolf racing along on a cool-looking motorbike that suddenly stops right before the reels, blowing at all the symbols. The symbols then line up again, giving you the maximum payout. This is a truly great feature because it comes around so often so you can count on winning a decent amount by playing the game.

The Game logo, acting as the scatter when it pops up on the 1st, 3rd, and 5th reels, will give you 15 free spins. While in this mode, if you have the Wolf popping up right away towards the right side of any one of the piggies, you are in for a really big win. Both characters will emerge from the screen, as the wolf runs around chasing after the piggy, and this serves to convert every one of the crossed symbols into wilds.

Piggies and the Wolf Slot Review

This is an extremely enjoyable game, with a very cool-looking presentation. The graphics and animations are exceptional, as well as the soundtrack. You can get totally immersed in the game and lose track of time, it’s so much fun. The animated little pigs running around looking for shelter are so cute you just want to cuddle them in your arms!