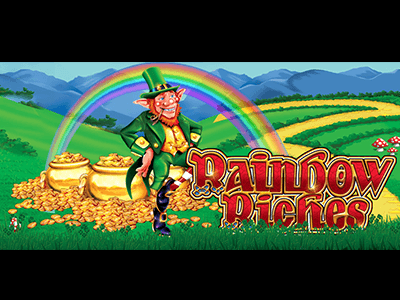 Rainbow Riches is one of the most iconic games the industry has to offer, instantly recognised by many players through its unique interface and soundboard.

The game incorporates up to 20 winning lines per spin and 5 reels to win from. Integrated into the slot is a network of features, wilds and jackpot winning symbols, although offering many chances to win the slot machine is easy to follow and play.

For those long-term or lazy players among us, there is a handy autoplay option which can set the reels off effortlessly, allowing players to sit back and watch the game unfold.

Most commonly found in many bookmakers, this game had its first hit through the FOBT machines and was rolled out online – over the years, this title has picked up momentum and is still hitting online casino’s top-played game lists around the world. The lucrative jackpot is also well known among players offering Bronze, Silver and Gold with larger figures for each one respectively. 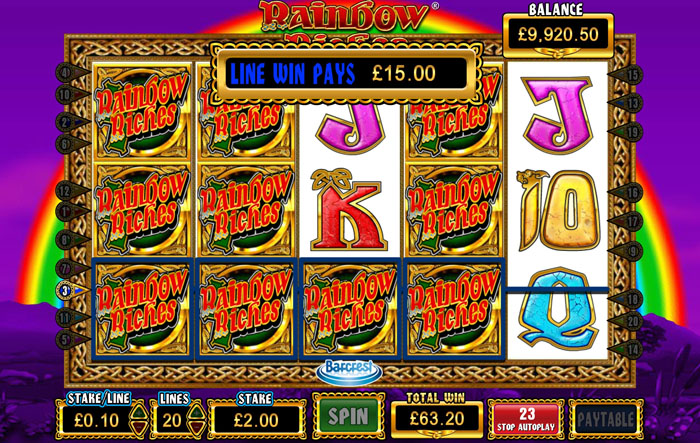 The first bonus, which is more commonly triggered, is the Rainbow Riches trail – activated when three or more leprechauns are brought into view. The leprechaun is shown throughout the game as wearing a green hat, appearing through a golden loop with a red background, his cheeky smile and wink could be the last thing you see before winning a fortune. Nothing is triggered with one or two on display, the fun starts when three are brought into view.

Once you bring three into view you will be taken onto a Rainbow Riches trail, the aim of the game is very simple – move as high up the path as possible with each step increasing the amount won. You cannot lose with this game, the money claimed on the trail is safe however you can trigger the exit button through spinning the wheel.

You are required to hit the play button which will spin the leprechauns wheel, the game will proceed with whichever option is landed on, the majority of options revolve around steps up the path with two losing options. The further you get up the trail the higher the multiple of your initial stake will be awarded.

Additional Note: If you are fortunate enough to land more than three leprechauns into play then the multiple starting figures will be raised – offering large amounts of cash.

An in-game feature is also possible with Rainbow Riches, if you bring three of the well icons into play you can select either one of them when the bucket is raised it will reveal a number which will be a win based on multiples of your stake.

The final feature is by far the most desired, the Pots of Gold bonus. When three or more pots of gold icons appear on your reels then you are in for a bonus amount. You will see a dancing leprechaun surrounded by a circle of potential bonuses, spin the reel and hope for the best. The Bronze, Silver and Gold pots tend to represent varying amounts with many bookmakers making this progressive. The pot you land on will be the bonus amount you are awarded – aim for the gold!

What an absolute gem this slot title is turning out to be, consistently appearing in most online casinos “Most Played Game” lists, it really is getting better as time goes on. Many other slot software providers have attempted to recreate the success this game has had with similar slots however not one has come close. We enjoy the game very much here at FreebieSlots and there is nothing more pleasurable than hitting the bonus games – every time we have it’s been a decent payout.

This game is also known for paying jackpots out on a regular basis, they are not the highest amounts available in a slot but it’s pretty consistent.

Play Rainbow Riches at Slots Million and get a 100% bonus and 100 free spins.