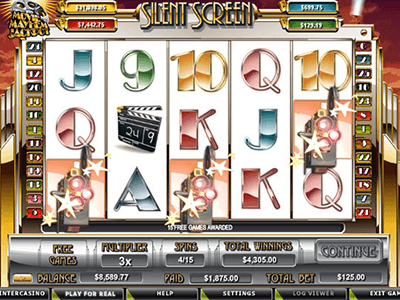 Silent Screen harks back to the days of Silent films. For the younger generations who may not know what silent films are, well those were made before they figured out how to add sound to the movies, so the dialogue had to be spelled out on the screen for viewers to read. Technical problems had to be overcome to add sound to the movies and this didn’t happen until the late 1920s. One of the first movies to include synchronized sound was The Jazz Singer, which came out in 1927.

They no longer produce silent movies due to all the technological innovations in the industry. But people do remember back and occasionally they air a silent film on TV. The Silent Screen slot game by Amaya allows these memories to live on. This video slot has 5 reels and 25 paylines and can be played for real money or you can play Silent Screen for free online by visiting Internet casinos that support Amaya’s software platform. This game pays tribute to the classic movies of the silent film era when legendary films like The Artist, The Kid and City Lights were produced.

Except for the symbols of the typical poker card deck, all the symbols in Silent Screen are related to the theme. They include the Movie Camera, an Actress, an Actor, the Director, the Film Slate and the Cars of the era.

Typically, the Actress symbol is wild and substitutes for all the other symbols except for the Scatters, which are Cameras. Along with being wild, the Actress symbol pays out the highest amounts. If 5 Actress symbols pop up in a row the payout is 5,000X whatever your line bet was. If you bet the maximum of 20.00 coins a line, you would win 100,000 coins!

In the meantime, if you get 3 or more Cameras popping up anywhere, these Scatter symbols will activate 15 free spins and tripling all winnings. This feature can be reactivated as well.

When you begin spinning the reels, you will see as many as 4 jackpot amounts displayed at the top of the reels. These are randomly awarded jackpots. You can choose as many as 6 items to locate the Movie Tickets, which will disclose corresponding amounts for jackpots. The higher the Ticket numbers the larger the jackpot.

When playing the Free Spins feature, you cannot win the Movie Mayhem Jackpot.

Silent Screen works for players wanting low limits as well as high rollers. This is a versatile slot game as far as betting range goes, with low bet limits of 0.25 on all lines, and the maximum bet at 500.00 on all lines.

If you are a huge movie fan you will love Silent Screen. The only improvement I can think of would be if they had a better bonus than just free spins, but that’s okay. The Movie Mayhem Jackpot does happen fairly often, but of course the top jackpot does not get triggered that often. Nevertheless, the gameplay is fun and the graphics, not bad. However I do want to mention that the sound effects are on the clumsy side, actually resembling the ones they had in the films of the 19