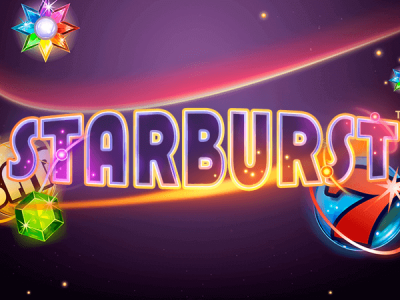 Starburst comes to us from NetEnt and is a slot game unlike any other. It seems like an arcade game when you play and the game is totally about Starburst Wilds. They pop up only on the 3 reels in the centre and expand to award you as many as 3 re-spins. You can win up to £50,000, which is a huge amount, making this fast-paced game totally mesmerising. Starburst is now among the most popular of online slot games.

Starburst is powered by Net Entertainment and is a 5-reel, 10-payline video slot game. Players can start betting for just 10p per spin and go all the way up to £100 per spin. Because this game is so popular I decided I needed to try it out and write a review. A nice mix of vibrant colours enhances the arcade theme of the game.  The entire design unlike any others I’ve seen.

This slot game is visually stunning with beautifully let jewels displayed everywhere. The soundtrack is brilliant, giving the game an otherworldly feel. While the game does not offer Free Spins, it does allow you to win both ways. The Expanding Starburst Wild is amazing and they can pop up on any of the 3 centre reels, expanding over the whole reel, remaining as long as 3 re-spins, giving you more free spins. This all gives you the potential for huge wins. 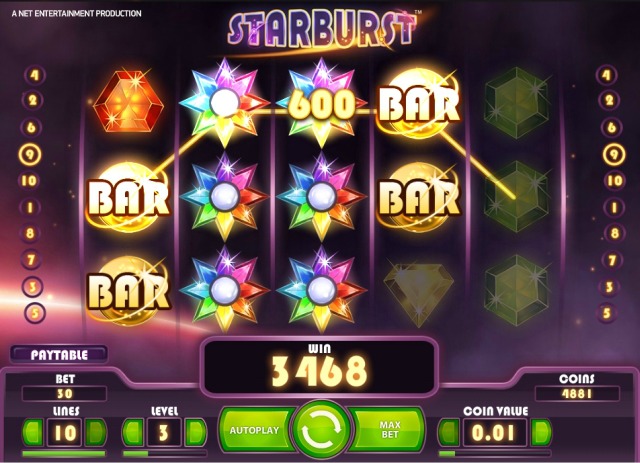 Starburst has a Wild feature that has Starburst Wilds expanding on reels 2, 3, and 4 whereby they cover the whole reel. The remaining reels now re-spin. If another Starburst Wild pops up during this re-spin, it will expand and the Starburst Wilds that previously expanded will hold in place with this Wild for another re-spin. This feature will continue on until there isn’t any new Starburst Wilds popping up during a re-spin.

If you are lucky enough to 3 Starburst Wilds expanding, you really can win big because the game offers as much as £50,000! Most of the time players win during the main game because the screen will light up with various combinations and win presentations. This is a really unique game because this alone has allowed me to win as much as 300X my stake on several occasions. Because the game is so unusual and offers the potential for giant wins is why Starburst is among the most popular slots online.

Review of the Starburst Slot Machine

Starburst gains much of its popularity because it is very similar to certain non-casino games like Candy Crush and Bejeweled in that it is full of bright lights and catchy sounds.  It also has a user-friendly interface, which many are familiar with since they’ve played these other games.

Starburst, which comes to us from NetEnt Studios, can be found on quite a few online casino websites and can be played through web browsers or mobile devices. It’s a fun, exciting game due to the visuals and sounds, but mainly because of the possibility for huge wins.