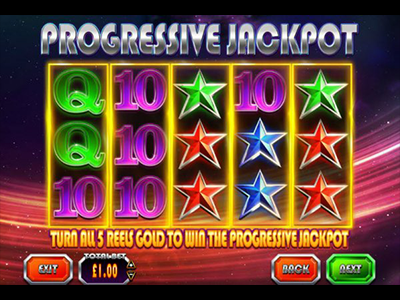 The Winstar slot machine is currently being powered by the Blueprint Gaming platform, this game is testament of the company focusing on quality games rather than churning out loads of different titles. A strong focus has been put on the graphics and gameplay experience and we are quickly becoming a fan of Blueprint, although they don’t receive as much recognition in comparison to other software providers like Microgaming and Net Entertainment.

There ae 10 available pay lines in the game which is through 5 unique reels, the entire theme of the game is focused around space and stars. Based on long term play the theoretical return to the player has been estimated as 96.44% which is a solid offering when compared to other industry slot titles.

Players can easily amend the total bet in order to fall align with their spending budget however the option to reduce or increase the lines in play has been removed. This is not a big issue as there are only 10 different lines available through the slot machine. To increase the excitement to players there is a random icon generator which is shown as a star, when you bring one into view it will rotate and evolve into one of the available graphics, all stars on view will morph into the same icon. If you get a winning line of random stars then you will be guaranteed a win, it can also help make up pay lines when stars are shown between identical symbols.

There are two main features incorporated into the Blueprint game, the first one is the feature we have discussed previously – the random star. When the random star is placed in view they will rotate and morph into identical symbols, a nice touch and way to earn more money from spins.

There are no bonus games such as free spins or themed side line bets, the game instead hosts a progressive jackpot which can be won at any time. To trigger a progressive jackpot win a player is required to turn all reels gold, this is automatic and does not revolve around hitting a jackpot combination of icons.

The Winstar slot machine is compact and simplistic, it hasn’t really took a fresh approach or tried to invent the wheel but all the game features and paylines come together to create an exciting and highly-playable game. The variations among bet sizes makes it an ideal game for both experienced and novice players, for the high rolling players the game can be boosted to a whopping £500 per spin. The artwork is clearly high end and the functionality is spot on – no sign of lag or technical issues however should they arise it will void all winnings. The game also has a healthy amount of paylines which vary from symbol to symbol.